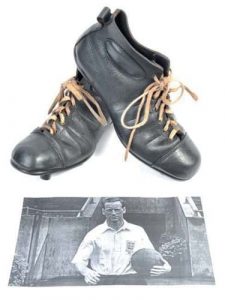 The simple pair of leather football boots on offer at East Bristol Auctions (17.5% buyer’s premium) this summer was not as flash as today’s examples in all colours and emblazoned with all kinds of branding and personalised messages.

However, they did display hobnails marking the initials TF, giving a significant clue as to why they made a mid-estimate £5400.

TF was Tom Finney and these were match-worn boots dating from the match on May 14, 1950 ,in which England beat Portugal 5-3, with Finney scoring four of those goals (including his only hat-trick for England).

Sir Tom (1922-2014) played from 1946-60 as an outside left for Preston North End, making 569 first-class appearances, but was also renowned for his international career, scoring 30 goals in 76 appearances.

According to the saleroom, “these boots were originally gifted to fellow England teammate and friend Alan Hodgkinson. Hodgkinson then gifted these boots to our vendor, a former footballer himself and former owner of a football club. Our vendor wishes to remain anonymous, but has supplied a letter of provenance for the winning bidder.”

Andy Stowe of East Bristol said: “They started off online then moved over to two phone bidders. One of the phone bidders was representing a football club relating to Finney, and they eventually got outbid by the other phone bidder – a private collector.”

The auction took place on June 19.