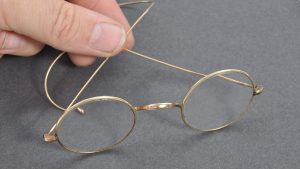 A pair of spectacles, believed to have once belonged to Gandhi, were hammered down at £260,000 in Bristol (plus 21.6% buyer’s premium inc VAT).

Two phone bidders battled it out after early internet bidding up to the £120,000 level.

Gandhi (1869-1948) was an Indian lawyer, anti-colonial nationalist and political campaigner, who employed non-violent resistance and led the campaign for Indian independence from Britain.

The glasses had been consigned to the auction house in Hanham, Bristol, by the owner who left them in a white envelope in its letterbox one weekend.

The vendor had inherited them from an uncle who was believed to have been given them c.1920-30 by Gandhi while in South Africa.

Andrew Stowe, auctioneer at East Bristol Auctions, said: “It’s a phenomenal result! These glasses have been lying in a drawer for the best part of fifty years. The vendor literally told me to throw them away if they were ‘no good’. Now he gets a life-changing sum of money. It’s the ‘good news’ story that we all want – as an elderly gentleman, our vendor has probably had a rough time in recent months and to be able to change his life is just incredible.”

After training as a lawyer in London, Gandhi moved to South Africa in 1893 to represent an Indian merchant in a lawsuit. He went on to stay for 21 years. It was in South Africa that Gandhi first employed nonviolent resistance in a campaign for civil rights.

The uncle of the vendor had been working for British Petroleum at the time and was stationed in South Africa. The family believe they were presented to the uncle by way of thanks from Gandhi for some good deed.

The early 20th century, c.1920 gold plated circular rimmed spectacles were catalogued by the auction house as ‘by repute owned and worn by Mahatma Gandhi’.

The auction house’s description states: “The spectacles formed an important and somewhat iconic part of Gandhi’s overall appearance. It was known that he would often give away his old or unwanted pairs to those in need or those who had helped him. A rare and important pair of spectacles.”

Stowe said ahead of the sale: “We first looked at the story to verify it was possible – and all the pieces of the jigsaw slotted together perfectly. The vendor’s uncle was in South Africa at the right time, as was Gandhi. We then looked at the specifics of the glasses, which also matched other known examples in museums etc.

“Then we discovered one pair in a museum which has the bridge section distinctly distorted to fit Gandhi’s nose, and ours carries the identical distortion – that can only be something specific to Gandhi. Unfortunately, through 100 years and three generations, the story hasn’t been preserved as neatly as we’d all like – but the broadstrokes are all there, and the jigsaw fits together.”

Following the sale Stowe added: “We had interest from all over the world – bids came from India, Qatar, American, Russia, Canada. It’s completely spellbinding, and a wonderful thing to be a part of.’

“These glasses represent not only an auction record for us, but a find of international historical importance. Gandhi’s glasses have surpassed all expectations, and previous house records. It’s been a great day!”

A number of items owned by Gandhi have sold at auction over the years. In 2009 a pair of his spectacles, alongside his leather sandals, a Zenith pocket watch and a brass bowl and plate from which he is thought to have taken his last meal, sold for $1.8m (£1.4m) at Antiquorum in New York.

In June 2019 a maquette for the famous Gandhi statue in London’s Tavistock Square made £52,000.